Ok. Sorry for the delay. I tend to get sidetracked. You are so surprised.

So who's ready for more Costa Rica? Hopefully you said "ME!", because if not, you'll be sorely disappointed in this post.

Day 5 ended with driving back down that CRAZY bumpy road, if you can even call it a road, from Monteverde, to my bro's house. The next morning, we said goodbye to my mom at the airport. Goodbye mom! :*(

Then we were on the road for a 2-3 hour drive (I think) to the beautiful beach of Manuel Antonio! On the way we stopped off at a "crocodile bridge" to see the crocs. They were pretty fascinating. Although though they didn't move. Even when we spat on them. 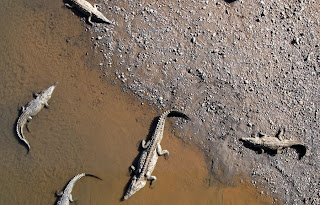 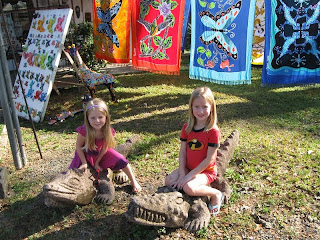 Also on the drive down, we were lucky enough to see four Scarlet Macaws at Jaco Beach. Which, we were told, is one of the only places you can see these birds in the wild in Costa Rica. 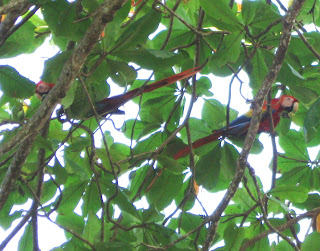 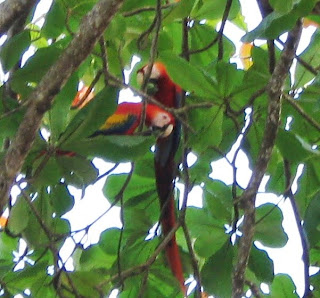 Freaking cool, huh? I love how rainbow-y they are.

Ok, so we finally arrived at our hotel, which was basically right on the beach. Awesome. 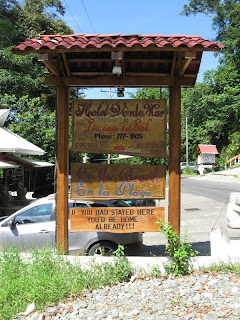 And, because we were basically on the beach, we did not delay in changing into our swimwear and heading right out to the ocean for some boogie boarding and sand-playing. 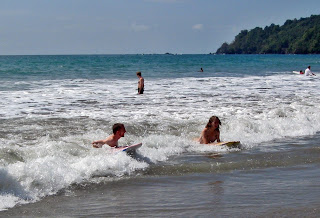 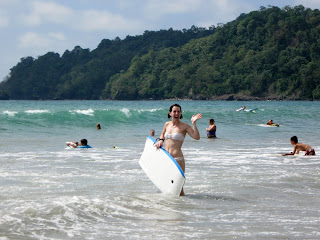 Since I'm only mildly obsessed with the beach, I will post just a few pictures. 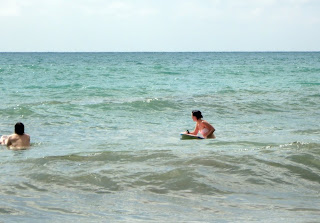 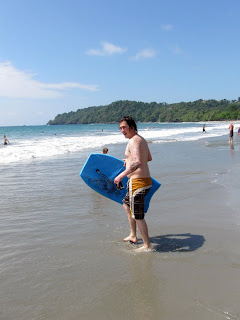 Or a whole bunch of them. 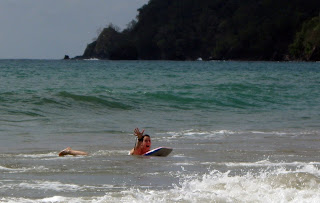 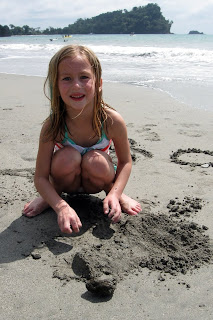 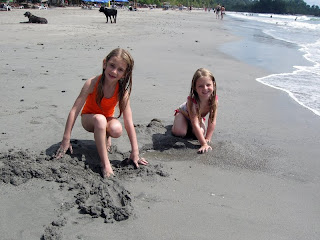 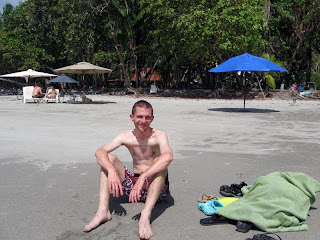 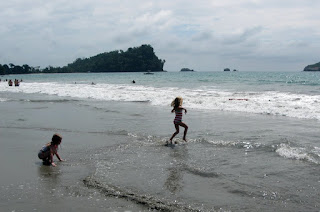 The rest of that day was spent hanging out, spending money at the local shops, and swimming in the hotel pool. Then we took a few pictures of the gorgeous sunset. 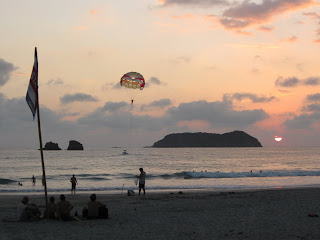 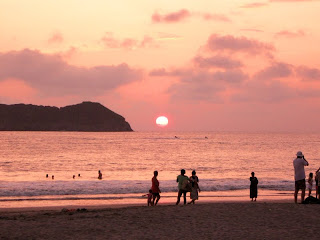 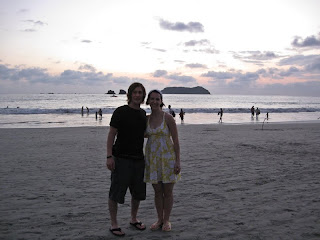 To end the night, we watched the girls so that Brandon and Jen could go on a romantic moonlit beach walk. Then they did the same for us. It was great- I mean, how often is it that you get to take a moonlight stroll with your significant other on a warm beach in Costa Rica? Not very often, I tell you. Not very often.

Next up: Day 7. More beach and some crazy wild monkeys.

You have a grrreat swimsuit body. Serously, I want your abs.

This news about you loving the beach is just so shocking. I had no idea.... :)

Glad you got some good beachtime while you were in Costa Rica. Wish I had been able to share in it with you... as long as I'd have had a shady spot under a tree.

The Macaws are beautiful - I'm so happy you got to see them in the wild!

looking at those pictures of you all on a warm sandy beach, with the sun shinning on your shoulders, and the sand beneath your toes, and the cool of the water.... has made me officially depressed.
So, thanks for that.

If I didn't like you so much I would have to hate you. The beach pictures made me sad for 2 reasons-
#1-your body
#2-I miss the ocean
So on that note-have a fabulous day;)

Sigh! that was lovely. Thanks for the peek into another world, a warm one at that:)

That was one fun day at the beach! And in the pool. :) The Macaws were a very nice addition to the day as well. Thank goodness for the beach. :)

Aahhh.. Great memories. Great pictures, too. And thanks for letting us take that moonlit walk. :)

You look awesome, and the trip looks amazing. As I've said before, I'm SO jealous!!

Gorgeous! Those birds are so beautiful.

that post is really making me crave a trip to the beach myself. love the pictures! and i love that rainbow-y bird too!

You guys are way too kind. Just like most women- I have MANY a flaws I would love to see go away on my quite imperfect body.
But thanks. It's always nice to hear :)

Websites I grace with my visits